Notes from the meeting of 7th May 20


Watching the elegance of the swans in the lower pond on the Heath gave rise to pondering on Sydney Opera House. Utzon’s early sketches show him to be influenced by nature and in particular birds


It was agreed that the Heath Swan is a floating flying opera house .


(consider maybe swan outside but its feathers and inspiration denied for its interior , one can only imagine what might have been? )


people who can own and eat swans


the ownership of swans in the Thames is shared equally among the Crown, the Vintners' Company and the Dyers' Company. The monarch is the only person allowed to eat Swans .


As a beautiful creature the swan as a super-duck cannot escape its destiny in the place of architectural theory as a recollection of Venturi’s duck ..


Mimetic architecture ? ( what happened to that ?)


Was agreed that Swan+ Duck + Vaucansons shitting duck, or more politely Canard Digerateur offers a technically inspired architectural journey with a yearning by some for kinetic time based forms in a constant state of evolution , rather than forms that only mimic this is idea . Did Venturi ever go to Bavaria hard to believe he didn’t  For example on every floor of the castle there were toilets with automatic flushing system, a well serviced fantasy ? To be discussed .


Committee agreed that the lyrics to this song are meaningless but the swan and the song are beautiful .. however it was noted that Lohengrin, a character in German Arthurian literature. a knight of the Holy Grail went in a boat pulled by swans to rescue a maiden who can never ask his identity. Research Question did Marc go to Bavaria ? Advise TFL of Heath Swans as zero carbon transport solution?


The exploitation of the swan by artists ,Rubens’s ‘Leda and the Swan’ declared inappropriate material for channel media studies.


Poor Swan to be so used , misused by monarchs , engineers , architects , poets , ballet dancers ,and in mythology called "Eala" in Scots Gaelic, "Eala" in Irish, "Alarch" in Welsh, "Alarc’h" in Breton, "Olla" in Manx and "Alargh" Cornish, just to mention a few


no wonder you can have such a bad temper , but nevertheless you are lucky .. it is illegal to kill you in many parts of the planet . 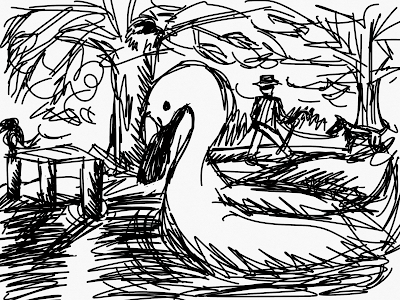 
*additional paperwork: Mike Davies
Department of Swansport
Swanassesment 94-3.
Collision Danger Alert.
The DES points out that although virtually all movement by Swansport is now automated-  in the now relatively small percentage of trips undertaken under manual guidance, considerable risk still exists.
SSP-1a  Collision Risk
1     The DES has underlined that risk of collision exists when driving Swansport vehicles in urban areas under visual guidance.
2
There is a risk of impact with street furniture - and specifically with any form of vertical urban street furniture.
3
In order to mitigate the risk of collision, the Department of Swansport, TFL and SFL - Swansport for London stresses thst Rule 9a of the Swansport code must be followed when  driving urbaswansport in visual mode.
Rule 9a states specifically that the head and thorax swinging movement prescribed in the Swanway Code must be constantly applied when swanning - causing the drivers head to be moved laterally from side to side, allowing the driver to observe the full width of the Swanway ahead.
This procedure is essential when swanning -  as the neck of the Swanickle being driven, being vertical, can obscure any vertical street furniture - ie lamp post,  telegraph pole, signage or other street furniture.
The head and thorax movement of the drivers body proscribed under Rule 9a, ensures that any blind spot hidden by the swan neck in front of the driver is visually scanned and any hidden vertical object recognised and avoided.
It should be noted that in Springtime Swanicles grow new feathers and in consequence, their necks may become an even greater visual obstruction in front of drivers than in other seasons.
The Department of Swansport remind all those Swanning around that the manual driving of Swanicles has inherent risks.
SwAlert 57
Ends